The Right to Write the City:
Breaking the Law of Untouchability

Street art is a form of democratic conversation not captured by conventional understandings of how art works. It provides a point of potential connection with others, and a sense of attachment within a potentially dehumanizing urban space. The fleeting moments when we are ‘arrested’ by work on the street may in turn afford the potential for ethical engagement and indeed the radical realization of one’s own right to write the city. Street art’s invitation to engage in the city’s ephemeral dialogue is antithetical to traditional heritage frameworks, although this may fit within an understanding of street art as a living tradition, or as intangible cultural heritage. 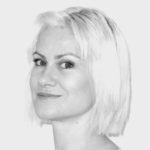 Susan Hansen (UK) is Convenor of the Visual Methods Group and Chair of the Forensic Psychology Research Group in the Department of Psychology at Middlesex University, London. She has research interests in viewers’ material engagements with, and affective responses to, street art and graffiti; in the analysis of street art and graffiti as a form of visual dialogue; and in the promise of an archaeological approach to understanding uncommissioned independent public art.

With Phil Healey, Head of Visual Art at London’s Middlesex University, Susan recently convened a symposium on Creative Responses to the Urban Environment (https://www.ica.org.uk/whats-on/symposium-art-streets). Held at the Institute of Contemporary Art, and open to the public, this interdisciplinary symposium explored the diversity of creative responses to our urban landscape – from street art and graffiti to yarn bombing and urban photography. The symposium brought together leading international contemporary researchers, curators, artists and photographers in the field of urban creativity.

A traditional understanding of the ways in which we make sense of art assumes the reception of a transhistorical singular meaning identical with the artist’s intention. The philosopher Jacques Rancière refers to this as a model of stultification that sees meaning as conveyed via the logic of cause and effect, with the transmission of the artist’s intention to the spectator positioning viewers as passive recipients. However, graffiti and street art accord the citizen-viewer radically different possibilities in terms of their active participation and engagement with art.

Art historian Anna Waclawek asserts that the viewer of work on the street, in the act of encountering the work, achieves its “transitory completion,” and that the authorship of street art is thus a “community affair.” Of course, the notion that the act of reception and interpretation implies a form of participatory authorship is not unique to street art and graffiti. Indeed, the literature on contemporary art also makes use of this notion, with Martha Buskirk arguing that a work of art is created through the viewer’s “experience of the work as a series of unfolding encounters”; Howard Becker claiming that a work’s completion is continually determined anew by its reception; and Pierre Bourdieu maintaining that the plurality of re-readings inherent in the reception of an art object engender its recurrent recreation.

Rancière asserts that viewers are not passive and thus do not need to be encouraged or shown how to actively engage with work, as they are already involved in an active process of interpretation and appropriation:

«[B]eing a spectator is not some passive condition that we should transform into activity. It is our normal situation. . .we have to recognize… the activity peculiar to the spectator…[which] requires spectators who play the role of active interpreters, who develop their own translation in order to appropriate the “story” and make it their own story.»

Beyond this form of immaterial participation through reception, aesthetic experience and interpretation, it may be argued that street art offers viewers a more active role in inviting them to consider materially engaging with the work on the street by making their own marks in response. This too has a parallel in the contemporary art world, in work on audience participation and viewer interaction. Art critic Nicolas Bourriaud’s influential framework of relational aesthetics presents a utopic reading of the possibilities inherent in work that aims to encourage the interaction of viewers. He asserts that this may provide for the formation of new micro-communities, novel social experiments and enriched interpersonal relations. However, the institutional context of the museum closes down the likelihood of such emancipatory principles translating into democratic practice, as these “new micro-communities” are in fact dialogues occurring within the established networks of the communities of practice peculiar to the art world which neglect the site “specificity of local art and cultural production and political disputes within and between communities.” 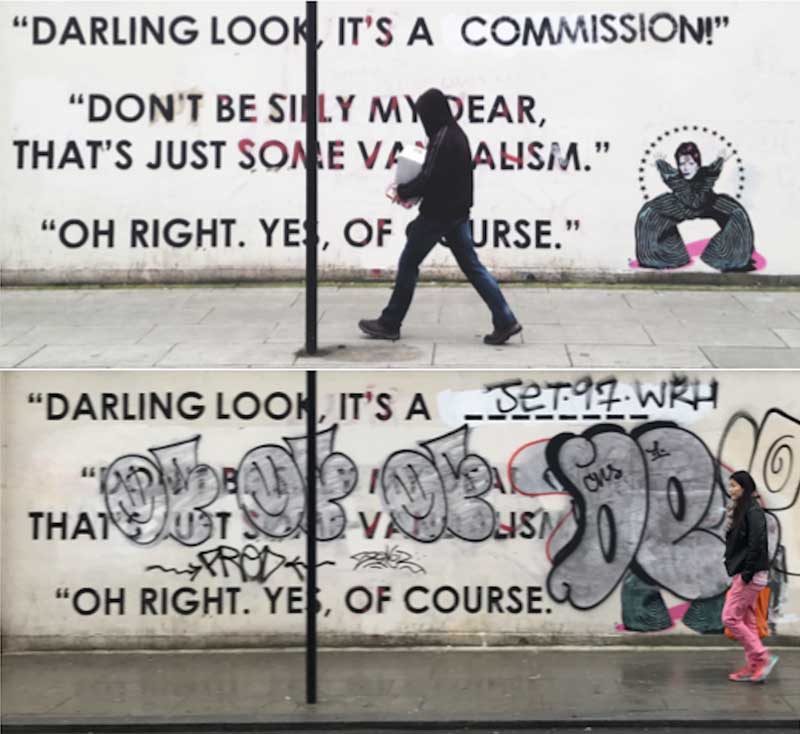 While commissioned public art often positions its “user groups” as inherently passive, requiring solicited invitation to participate and experience the work — street art arrests the passing viewer without prior consultation, involvement or forewarning. Street art’s distinct aesthetic of display accords viewers the right to interact differently to the ways in which they might engage with art in institutional contexts. Derrida described graffiti’s “aesthetic of the outside” as “an aesthetic of touching” that stands in contrast to the regulated interactions permitted in museums, where touching the exhibits is forbidden, or in the case of “interactive” works, highly circumscribed and monitored. For Derrida, graffiti breaks the “law of untouchability” in that it invites viewers to touch – and even to leave one’s own trace on the wall.

Work on the street offers an invitation to engage in the city’s incessant ephemeral dialogue. As Lachlan MacDowall has noted, any particular piece of street art creates the conditions for its own interactivity, ‘authorizing’ further unauthorized use of urban space, and thus often provoking a series of works in situ. Alison Young suggests further that street art may afford unexpected opportunities for ethical engagement as it arrests our otherwise smooth motion through urban space, which may provide productive fissures in our ordinary ways of seeing, and being with others, in the city. Conceived as a “tangle in the smooth spaces of the city out of which comes the potential for enchantment,” this moment of “arrest” need not necessarily involve visual pleasure, but may indeed be experienced as troubling, unsettling or unheimlich. Enchantment may afford a moment of seeing other possible ways of being in the city that may fall outside of viewers’ conventional expectations. The enchantment of street art provides a point of potential connection with others, or a sense of attachment within a potentially dehumanizing urban space. In this sense, a “moment of enchantment” may afford the potential for ethical, material, and political engagement.

Street art provides the conditions of possibility for new forms of ethical engagement and indeed the radical realization of one’s own right to write the city. However, this invitation to engage in ‘destructive’ democratic dialogue is antithetical to both conventional notions of the passive reception of art and to traditional heritage frameworks that attempt to ‘protect’ particular works of value against such destruction – although this may be congruent with an understanding of street art as a living tradition, or as intangible cultural heritage. In a forthcoming book (with Lachlan MacDowall and Sam Merrill) on The Contested Heritages of Graffiti and Street Art, we critically examine the implications of an understanding of street art as a form of intangible cultural heritage for recognising its essentially ephemeral nature – as the collective expression of a living culture that places a high value on the fleeting nature of its material traces.1

1 An earlier version of sections of this discussion appeared in Public Art Dialogue.