Women’s Right to the City

The greatest impact we can make in the city is to leave our mark upon it. So writes Henri Lefebvre in 1945: “Everyday life is not unchangeable; it can decline, therefore it changes. And moreover the only genuine, profound human changes are those which cut into this substance and make their mark upon it”1. Henri Lefebvre is the French Marxist sociologist and philosopher best known for his conceptualisation on the ‘right to the city’2 and whose ideas on the urban continue to resonate. Though the right to the city as a concept is experiencing a resurgence, there is a significant omission in Lefebvre’s articulations and its myriad interpretations. Not everyone has the same access to the city. Race, gender, ability, sexuality, and other dimensions of difference in uence mobilities and access to the city. Ignoring difference is problematic for it reproduces inequalities in the city and its capitalist and patriarchal power structures. 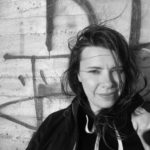 Emma Arnold is a dual Canadian and British citizen who has lived and studied in Canada, Greece, Hungary, Norway, and Sweden. She is a cultural geographer with a background in environmental geography, environmental impact assessment, and environmental policy. She has previously worked as a policy analyst developing environmental legislation and regulation for the Canadian government. She is currently a doctoral research fellow at the Department of Sociology and Human Geography at the University of Oslo, where her research focusses on environmental aesthetics, graffiti and street art, and urban space.

It is in Lefebvre’s key ideas on the critiques of the everyday where the Situationists certainly took inspiration. The Situationists, an organisation of avant-garde artists and theorists active in the 1950s and 1960s, believed that in intervening in everyday spaces of the city where capitalism is made and remade, capitalist forces shaping everyday life and society might be ruptured3. The Situationists’ psychogeographic wanderings and artistic practices in the city were charged with political and creative energies4 which are re ected in the works of many contemporary urban artists. In making marks in the street, the elite space of the gallery may be (momentarily) circumvented and the machinations of the art market challenged. Though art markets have indeed embraced and subsumed urban aesthetics and subversions of the street, pieces in the city still gain their meanings from their geography as much as their aesthetics. One might argue that gra ti writers and street artists intervening in the everyday embrace so well and in many ways exemplify Lefebvre’s right to the city which involves the rights to appropriate, use, and participate in urban space5.

Women have not had the same opportunities as men, however, to appropriate, use, and participate in urban space. The city has long been seen as a place for men while domestic spaces of the home have been reserved for women6. This gendered division between public and private spheres perseveres despite feminist strides. Men move more easily throughout the city while women’s mobilities are wholly di erent, often adjusted and mediated by time of day and type of space7. The city at night is frequently considered unsafe, leading women to consequently alter their routes through the city8. Street harassment, threats, and fears of sexual assault and violence keep women from the city at night, and at the very least in uence how they navigate it. Women’s bodies in the city at night are also sexualised; euphemisms such as “women of the night” and “street walkers” hint at how women’s presence in the city at night has been historically for sexual consumption by men9. 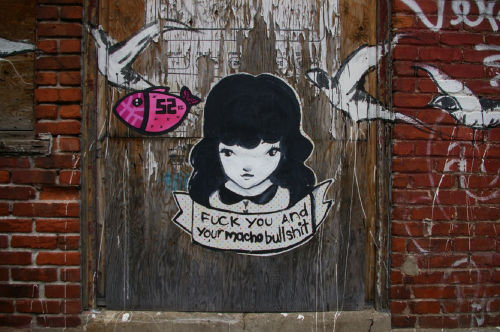 Graffiti, and perhaps to some extent street art, are often framed as masculine activities11. To succeed in such environments, it has frequently been masculine traits which are favoured and valorised, such as strength, bravery, and toughness. Though women are involved and have been since the very beginning, they have not been written into the subculture’s history in the same ways as men. The myth of the male vandal has bene ted politicians, particularly in contexts of strict policies against gra ti in which portraying writers as aggressive and male has facilitated public support for wars on gra ti. Indeed, wars on gra ti under regimes of strict or zero tolerance have also had gendered rami cations on the city. What began as a culture open to women became less accessible as security intensi ed and penalties became more severe in many cities12. Women have been less prone to take risks in such environments13.

Graffiti writers and street artists, particularly when working illegally, appropriate space and remake the city. This is often done at night and in spaces which are not always safe, particularly not for women. As such, women do not have the same ease of access to create and intervene in the city. Institutions surrounding these cultures are also male dominated. Street art and mural festivals are habitually organised and managed by men and dominated by male artists. Scholars writing on urban issues, including those writing on graffiti and street art, are also most often men. Despite underrepresentation, there are nevertheless very many female artists working in the streets though they are a minority and work under different conditions.

Neoliberal urban governance has done little to improve women’s right to the city. Zero tolerance as a policy approach is emblematic of neoliberal trends in cities as are the increased public-private partnerships which bring advertising giants like ClearChannel and JCDecaux into virtually every space of the city. In regimes in which graffiti and street art are habitually cleansed from the city, an atmosphere in which advertising flourishes is created. In these advertising spaces on walls and sidewalks, buses and trams, and all manner of public infrastructure, idealised and sexualised images of women are also brought into the city. These images intensify the masculine city, allowing women to serve as not only decoration for the heteronormative male gaze but also contributing to a worrying sexualising of space. In low ambient light, these backlit images dominate urban spaces at night, at times when women are most at risk and fearful. 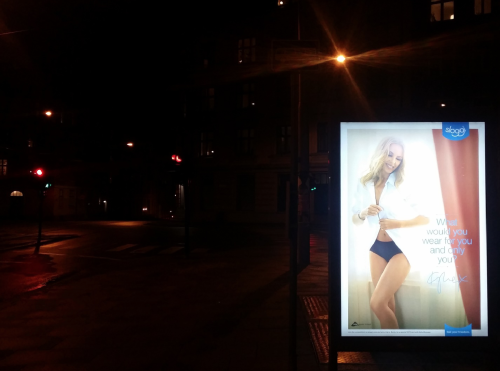 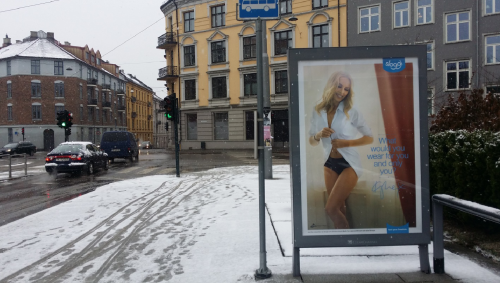 [Figures 2 and 3]
Effects of sexualised advertising in the city exacerbated at night, Oslo (2015)

Graffiti and street art offer opportunities to resist and disrupt this increasing commodification of urban space. The alternative aesthetics offer a diversion from the images of advertising which take over vital public space. Women’s different access to the city has certainly affected their participation in the culture of urban art. Yet, women’s actions are needed now more than ever. If Lefebvre wrote that we might contest capitalism though making marks and intervening in the city – a capitalism patriarchal in its very nature – it is women intervening in the city whose actions may contest the patriarchal nature of an urban space which is persistently masculine and ever sexualised.