Carlo McCormick: Learning to Play Along the Battle Lines

You can discover more about a person in an hour of play than in a year of conversation.
—Plato 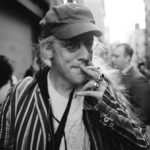 In honor of this year’s Nuart being dedicated to the notion of play as set forth by the Situationist International, and the participation of Jamie Reid as one of this year’s artists, I’ve set forth with some trepidation along that thin and contentious line where a kind of playfulness in gestures, if certainly not rhetoric, follows from the Situationists and the Student Revolts of May 1968 through to Punk Rock a decade later. Reid is after all most famous as the great graphic artist behind The Sex Pistols, the man who put the safety pin through the queen’s nose, wrote the lyrics to “Anarchy in the U.K.” and fathered that ransom note style of cut and paste lettering that became de rigueur for punk rock fliers ever-after. But before even that he was a Situationist, so he’s an easy example for all of us to understand how a tradition of visual antics and cultural pranks could be passed on through generations and end up playing such a significant role in street art today.

It is a relatively simpler task however to track the riotous radicalisms of the Sixties going forward than to understand where they came from. Rebellions manifest as the flashpoints along the fault-lines of our cultural dis-ease, each upheaval a seizure like a spasm meant to address some pathological discomfort in the body politic. I’m not particularly interested in changing the world, I just like to watch it dance and shudder trying to get away from its own sickness. If it is play it is like that of the shattered children in Jeaux Interdits (Forbidden Games), Rene Clement’s profoundly disturbing masterpiece about two little kids whose lives have been utterly destroyed by the war, entertaining themselves by creating their own little pet cemetery amidst the ruins of World War 2. This is the great game of artists working in the streets today, and though we find it all so amusing we might also heed the words of that true comedian of the people, Charlie Chaplin, when he said, “To truly laugh, you must take your pain, and play with it.”

To explain all this, how a culture of conformity could not only get pissed off enough to take up arms but could also somehow learn to laugh at itself along the way, I’ll be giving a talk called “The Revolution Goes Pop” as part of Nuart Plus. Here we will look at the art of the Situationist International during the height of the May 1968 uprising, in particular the graffiti and the posters produced by the Atelier Populaire, that is quite literally the street art of that time. And to understand how art could play such a prominent and populist role in the politics of that time we will also look at how pop art itself came to inform political art through a visual meme like Jim Fitzpatrick’s ubiquitous Che image based off the Alberto Korda photograph, and the highly influential art direction of Roman Cieslewicz for the French magazine Opus International. Along the way we’ll cavort with the cultural provocateurs of that era including The Living Theater, Black Mask, Up Against the Wall Motherfuckers and King Mob, and wrap it up with that pantheon of punk-freaks – Gee Vaucher, Gary Panter, Arturo Vega, Winston Smith and Raymond Pettibon- who, like Reid, re-imagined the ephemeral pictorial polemics of the Sixties into the iconic nihilism of a new day.

As we come to terms with the profound impact that Situationism, the youth revolt of the Sixties and punk have had on the kind of art being produced in the streets today, we need to also recognize what has been often lost in the translation and the hypocrisies that such a slippage of content and intent produce. We may locate this most succinctly at the moment in Dismaland, the latest subversive spectacle from Banksy now going on in England. The one artist working the streets today who bears the most obvious and direct relationship to Situationist and post-punk strategies, the fact that for all its parodist power Banksy’s satiric take on Disney magic must inevitably become its own mimetic reproduction, like a simulation of the simulacra, brings to mind Guy Debord’s Situation of the Spectacle. The landmark text of the Situationism written by the movement’s founder and published on the eve of the student revolts, it tells us clearly from the outset:

“In societies where modern conditions of production prevail, life is presented as an immense accumulation of spectacles. Everything that was directly lived has receded into a representation.” This primary lesson, that no representation can possibly free us from the endless web of reproduction we now live in, is one all artists working in this idiom should heed, and those of us who find our own cultural liberation in these forms might consider Debord’s warning that “the spectacle is not a collection of images; it is a social relation between people that is mediated by images.”

This collective folly then by which we allow our discontent to be distilled into art and as such subject to our aesthetic fetish is itself completely contradictory to the revolutionary purposes from which we so liberally borrow our ideas now. I think of this, and my own problematic culpability in this process as I put together the images for the Nuart talk. I marvel at the posters put out by the Situationists, and with an eye towards how “collectable” the prints of our favorite street artists have become, I am reminded that Atelier Populaire strictly forbids the sale of their posters for any reason, and explicitly condemns us from taking pleasure in these images, declaring:

“The posters produced by Atelier Populaire are weapons in the service of struggle and they are an inseparable part of it. Their rightful place is in the centers of conflict, that is to say, in the streets and on the walls of factories. To use them for decorative purposes, to display them in bourgeois places of culture or to consider them objects of aesthetic interest is to impair both their function and effect. This is why Atelier Populaire has always refused to put them on sale. Even to keep them as evidence of a certain stage in the struggle is a betrayal, for the struggle itself is of such primary importance that the position of an ‘outside’ observer is a fiction which inevitably plays into the hands of the ruling class. That is why these works should not be taken as the final outcome of an experience, but as an inducement for finding, through contact with the masses, new levels of action, both on a cultural and political plane.”
—Atelier Populaire, 1968